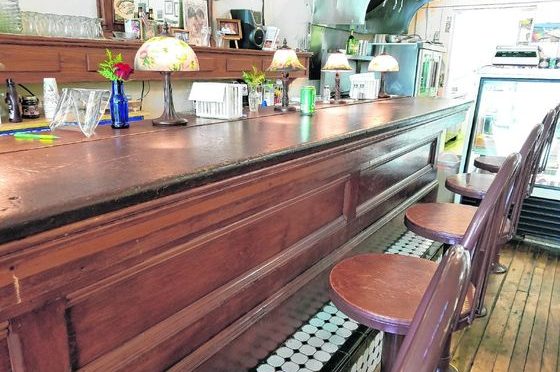 Editor’s note: The following is the second in a two-part series of rediscovering the Michigan of Ernest Hemingway’s youth. Part one ran on Aug. 14.

Chasing Hemingway south, I crossed the five-mile-long and windy Mackinac Bridge from the Upper Peninsula to the Lower and arrived at Petoskey, a base for many of his adventures.

The current City Park Grill — formerly known as the Annex — is in downtown Petoskey. Hemingway used to play billiards here, drink Prohibition era liquor (he sat on the second stool on the left) and watch bare-knuckled boxing in the park. Inside, the very high 12-foot-plus ceilings and a long bar are restored remnants of his and Petoskey’s past.

Locals advised me to travel further south to Horton Bay, a small town outside of Petoskey and four miles from his parent’s cabin on picturesque Walloon Lake, which is now off-limits for the most part. The nearby Horton Bay General Store is where Hemingway’s parents shopped and it currently serves as a small restaurant. The Red Fox Inn next door was once used for lodging and meals but now houses a small bookstore. Notable only for their link to Hemingway, it was nostalgic to walk the same floors as he did and to sit at the same counter as I ate a sandwich. I sat on the second stool from the left.

The last two days find me at Gates Lodge, in Grayling, on the banks of the world famous Au Sable River. For years a spin-cast fisherman, I am just beginning to acquire a modicum of fly-fishing skills. I felt a bit awkward around what I suspected were seasoned fly-fishermen. Men, who for the most part, were attired in natty, coordinated clothes, looking as if doting mothers had outfitted them at an Orvis store.

Looking back I would wager Hemingway loved the Fox for its isolation and abundance of brook trout and as Hemingway himself said in “The Big Two Hearted River” regarding the Fox: “It had been a hard trip. He was very tired. That was done. He had made his camp. He was settled. Nothing could touch him.”

Perhaps he loved the Au Sable because, well, because it was just so lovable. I fished it two days and on neither day did the river seem to be in a particular hurry. Riverbanks were barely above water level and were lined with wild flowers such as marsh marigold, blue flag iris, cardinal flower and swamp milkweed.

Contrasted with a backdrop of towering white and red pine, northern white cedar, balsam fir trees and a robin-egg-blue sky, the Au Sable was easy for me to love. With little development on it, it takes no imagination that this is the same river he fished 100 years ago.

I spent two four-hour days on the Au Sable, learning to improve my casting ability, to make that perfect “A River Runs Through It” cast. Let the line load, keep the loop narrow, mend the line, rod tip down and do it over and over again. So much to think about that other thoughts are blocked out.

The most memorable of the two days on the Au Sable was a half-day float with guide Mark, who is also a fly fishing instructor at the lodge and a retired fire chief of a major Midwestern city. Mark was a great help, and we floated down the Au Sable in his replica of a traditional Au Sable-style boat. Originally used in 1930 to float the river for logging purposes, they became popular for fishing because of their stability and stealth.

Mark’s boat is just shy of a narrow 24 feet, made of British-grade mahogany marine plywood. Propelled solely by a long pole called a punt pole, Mark expertly and quietly guided us down the river, constantly reading the water where trout may be hidden. Trout are wary, remaining hidden in an effort to ambush food or to not become food themselves. Though only five brook and two brown trout of mediocre size were boated, I had a great trip.

Fly-fishing, once Hemingway’s form of recreation, had instead, at 20, become a form of post-war physical and mental therapy for him. Michigan was his hospital. Perhaps it was easy for him to put the war out of his mind in these surroundings. Perhaps he could only think of lifting the fly line, looping it back then forward again, watching it rhythmically unfold across the water, its sole purpose being to land a dry fly so softly and so naturally as to fool the smartest trout in the river. He probably wasn’t so concerned about catching, rather just fishing, savoring the beauty that surrounded him.

Everyone has their formative years, that period of time when interests, fears and pleasures are instilled in us, that, so to speak, set the table for the rest of our lives. In that sense, neither you nor I are any different from Hemingway, are we?

From time to time, we all do well to revisit our roots, as Hemingway did, to enjoy old things yet take the time to discover new. It’s how we grow, how we have an epiphany, that “ah, ha!” moment. How can we go forward if we don’t know where we’ve been? Hemingway unwittingly used his fly-fishing to help heal him, not unlike the veterans group Project Healing Waters does today. Like you can.