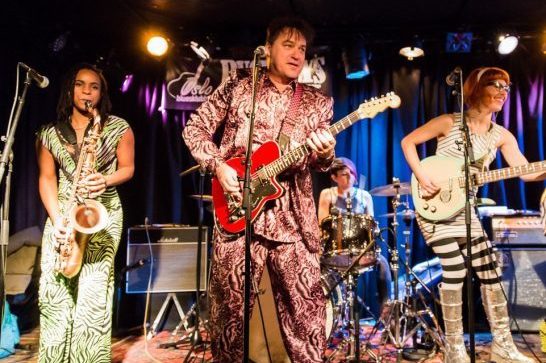 Hit the City Park Grill Stage in September
The Accidentals on Thursday, 9/26
Igor & the Red Elvises on Monday, 9/30

Named among Yahoo Music’s “Top 10 Bands to Watch in 2017,” The Accidentals’ adventure began in their hometown of Traverse City, Michigan, when Larson, a sophomore cellist, and Buist, a junior violinist, were paired for a high school orchestra event. The gifted young musicians became fast friends and before long, bandmates.

The past five years have seen The Accidentals perform over a thousand live shows, including headline dates, festival sets, and shared stages along such diverse acts as Keller Williams, Martin Sexton, Brandi Carlile, Andrew Bird, The Wailers, Joan Baez, and others. 2015 saw the band embark on their first full-scale national tour. Their SXSW debut saw them hailed by Billboard Magazine for “displaying a genre-hopping range of influences and some smart songwriting skills to go with their abundant musical chops.”

“We are thrilled to host The Accidentals at City Park Grill,” explains Joe Keedy, City Park Grill General Manager. City Park Grill has long been a live music hot spot for northern Michigan, featuring up-and-coming and well-established bands. “There’s a lot of excitement about one of northern Michigan favorite bands, and we are expecting a big crowd,” Keedy adds, “so we encourage those interested to buy tickets in advance on MyNorthTickets.com.”

The following week, City Park Grill hosts Igor & the Red Elvises, a Bliss Fest favorite. In 1995, lead singer, Igor, dreamed that Elvis Presley came to him and told him to start playing rock’n’roll. Igor and his Russian friends became Red Elvises and gave street performances on Santa Monica’s 3rd Street Promenade. As their crowds grew larger, the City of Santa Monica ordered them to discontinue their street performances. Evolving over the years, Igor’s music has been labeled “Siberian Surf Rock” which contains humorous lyrics and grooves that forces his audience to dance. Over the past 20 years, Red Elvises have constantly toured all over the world with occasional breaks to record new music and to participate in film and television projects. Tickets are available on MyNorthTIckets.com.